Stimulated emission depletion (STED) microscopy circumvents the diffraction limit of light by utilizing the physico-chemical properties of the fluorophor. It allows to record fluorescence images with a higher level of detail compared to diffraction-limited techniques such as confocal microscopy.

STED microscopy uses a second, ring-shaped laser beam to quench the fluorescence in the periphery of the excitation volume. 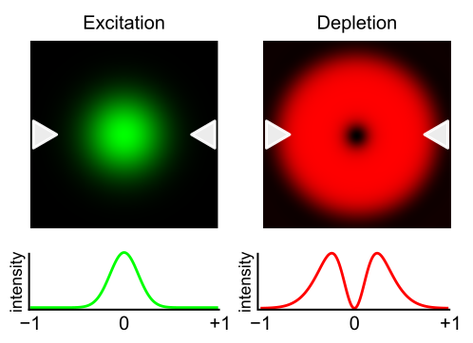 Relation between intensity and the probabilty to induce a change in the state of a molecule.

Here, $I$ is the intensity and $I_0$ is a constant that controls the steepness of the curve, it corresponds to a probability of approximately 67%. The general shape of such a curve is shown in the figure on the left. Note that the change in the probabilty is large for small intensities, but for higher intensities the probabiltiy is nearly constant and very close to one. Although the probability never actually becomes one, it is reasonable to state that for high intensities, $p≈1$.

We thus can compute the probability to induce a change in the electrical state of the molecule and at a cretain position by connecting the intensity of the laser beam and the probabilty:

Probability $p(x)$ (solid blue line, right axis) depending on the position $x$. The intensity profile of the ring-shaped beam is shown as dotted red line (left axis). A probability of 67% and its corresponding intensity of $I_0$ are shown as dotted gray lines.

In STED microscopy, stimulated emission is filtered from the femission of the fluorescent molecule and hence can be considered an off-state. Only excited molecules that emit spontaneously contribute to the signal and are hence considered to be in an on-state.

The excitation beam thus drives, depending on its intensity, the moelcules to the on-state (we neglect the probability here for simplicity), and the depletion beam de-excites them back to the off-state. This narrows the profile of the origin of fluorescence as shown in the comparison in the image to the left.

For higher intensities, the resulting origin of fluorescence becomes more narrow. The resolution $Δd$ thus scales with the intensity according to the following relation:

where $I_S = {\ln 2}{I_0}^{-1}$ is the intensity at which 50% of the molecules are excited and $\Delta d_0$ is the resolution without the depletion beam. The intensity-dependend increase in resolution allows imaging at a higher level of detail as can examplified by comparing a recording  of fluorescent nanoparticles obtained by confocal microscopy (left) and by STED micorscopy (right):

Fluorescent nanoparticles imaged by confocal microscopy (left) and STED microscopy (right). The center shows magnifications of the same area of the two recordings as indicated by the white boxes.